It was a warm August afternoon in 2016 and my future husband Alex had been talking about a date. Not our usual “date,” which was a word he used for a drive out to a remote (“and beautiful!” he always pointed out) part of the ranch to fix fence amongst the cacti or tinker with a solar water pump. By then I had learned that we could still have quality conversations working alongside each other and that a “normal date” was not usually in the cards, let alone more than an hour off during the long Montana summer days.

So our date today was a 5-minute stop at the Clyde Park pharmacy for a milkshake before moving wire and checking cow-calf pairs on Alex’s summer lease – something that we could hopefully get done before dark. After milkshakes, as we drove down the small county road with the leased pasture to the south, Alex slowed down. I could tell something was wrong. He was here two days ago and, as a part of his cell grazing protocol, had moved the cattle to new fresh grass. High-density/short duration cell grazing requires more time than traditional grazing and involves driving in fiberglass posts, stringing wire, and troubleshooting vegetation. Not only can it enhance plant regeneration and build soils, but by bunching up the herd, it can give the cows an advantage defending themselves should they encounter wolves.

On this afternoon, however, instead of seeing the pairs nicely grouped inside the electric fence, they were scattered along the meadow. Some were deep in the willows or way down the creek. These cows were usually as docile as you can get and highly trained to the  wire. We got out and started walking. There was still plenty of grass inside what used to be the pasture, and the wire looked like it was stretched, dragged towards the willows and snapped on the east side, pulling posts out of the ground. Something had run the cows through it.

We spent the next several hours, until the sun set over the Bridger mountains, setting up the new fence and walking the scattered cows back through thick willows, bogs and creek crossings to our next cell grazing pasture. In the fading light we hoped we got them all in, as a lone cow or calf in the willows may not do well if it encountered whatever it was that had spooked them. In the process of rounding them all up, we found, as I had feared, an upset mother cow without a calf. We looked carefully for calf remains, a lone calf, and wolf or bear tracks as we gathered, but did not find anything. At dark (just before 10pm) we still had over an hour to drive home and the usual 5:30am wakeup the next day. So we climbed back in the truck, exhausted and feeling defeated – knowing somehow we had to carve out more time for the cows in this pasture.

Throughout 2011, I had covered over a hundred miles of ground by bike, horse, ATV, foot, snowmobile and ski. on public and private land around this ranch looking for wolf tracks as a wolf biologist working for the state of Montana, before finally finding one in early summer.

By October, as a wind flecked with snow blew up the back of my ill-fitting men’s small uniform jacket, I buzzed out by ATV to start checking my trapline for the 8th morning. I wondered if I would have to give up after all. The dirt I set in was freezing and the operable trapping season was coming to a close. The landowner had asked the outfitter to hold off on bringing elk clients to the sections I was trapping so I could try to get a wolf collared. No pressure.

Some of the landowners in the area stood behind the idea of collaring wolves because they believed in managing using better information – using actual wolf counts rather than speculation, knowing how large the territory was with collar data, identifying which wolves may be responsible for dead livestock and providing ranchers that leased their ground with information to prevent conflicts with cattle. Other landowners were in favor  of collaring  because collars, of course are also used to help with agency removal when wolves got into conflicts with cattle – a policy in Montana that became more and more liberal as the wolf population continued to grow to several hundred wolves above the required minimum by the U.S. Fish and Wildlife Service.

I drove down the two-track as it dropped into a small stand of fir trees that curved around a stock pond. I slowed way down as I approached the traps, standing up as I crept along, looking down for tracks in the dirt to see if the wolves had come through. A shadow moved in the corner of my gaze and I slammed on my hand brake as two wolves—one black and one gray— came into view on either side of the dam, a front leg each caught in my traps. I’m sure an expletive emerged from my lips as I looked back over my shoulder to the faint game trail leading away from the dam and saw a third smaller jet-black wolf hunkered down, caught in my third set, looking up at me with her bright gold eyes. I quickly threw my ATV in reverse and parked it out of sight of the wolves as I loaded syringes with drugs.

To preserve that comfortable space between the wild and the metropolitan, ranchers need time and money, our business, and most importantly – our trust.

I fitted each of the three wolves with collars that day and then let them go. This was the first time wolves in the Bangtails had worn radio collars and we learned quite a bit. Throughout the next several years, wolves did end up getting into some trouble in the Bangtails, killing some calves and yearlings, and some getting killed. The data from those collars and subsequent GPS collars showed us their regular travel patterns. Within a year all three collars were no longer deployed due to possible poaching, a collar getting chewed off by packmates, and a dispersal. We were eventually able to collar more wolves, but the wolf hunting season was another reason that collars became increasingly difficult to maintain.

The idea that these wolves I was trapping could cause my family financial harm was not even a distant prospect. So in 2016, when we moved the cattle to this area, we knew that the wolves’ travel route crossed this meadow and the county road, and we had a strong interest in preventing wolf-livestock conflicts. We had come up with the best management plan we could considering our circumstances. But, we both had more than full time jobs aside from working this site. My husband had half of his cows at home plus changing irrigation dams every few hours every day, plus a bunch of yearlings he was custom grazing for a neighbor. It was simple. We had plenty of experience on the wolf and cattle front, but didn’t have what mattered most: time.

This is not a story about a finding a bloody carcass, or an ongoing battle between my family, our cows and wolves – though I have been through the stress and heartbreak of these. When we came back to look, we never did find a dead calf, but when we gathered from the area a short time after, we came up two calves short. Was it wolves? Was it a black bear? Was it sickness that killed them?  This is a story about a catch-22 and how priceless risk is when it is unquantifiable and constantly changing. We would have had to hire someone else full time to answer those questions. Those losses were not typical, and made a difference to the family financially, but hiring someone for a season ($15,000) could not be justified. Finding grant money and the right person to hire halfway through the grazing season was not possible. We tried. Long-term options like changing herd composition did not make sense, since this was a lease and wolf numbers fluctuate significantly here year to year.

I have had many close encounters with wolves, and in these moments I have found a direct, calm connection to the wild that is rare in our modern times. Some of those same days, wolves have also made me furious, exhausted, and stressed.

I have watched wolves feed and care for unrelated pups as well as their own. I’ve heard a wolf howl for her dead packmate in the draw behind my house for days. I have also watched wolves slowly kill a cow elk: rip chunks out of her haunches and bed down nearby to wait for her to bleed out. I have watched wolves kill another wolf. Wild creatures, like us, are paradoxical.

There are people everywhere. The human footprint continues to expand, the lights of subdivisions looming over nearly every horizon.  People are now becoming part of our wild ecosystems, and we have to figure out how to keep working landscapes – the essential connective tissue for wildlife species – intact.

A large number of American people, collectively through democratic law and policy, determined that wolves mattered to them. A small number of people, who find their bottom line generally at odds with having wolves on the landscape, now have to stretch their limited resources farther to accommodate them. Wolves are biologically resilient enough to persist in the Northern Rockies even when they are both hunted and removed for livestock conflicts –they are here to stay.

Voters in cities often want to know that novel, wild things like wolves can still exist while their daily view is framed by skyscrapers, pavement and automobiles. I can’t blame them. But I can imagine they wouldn’t want that pack of wolves running the roads in the Cherry Creek district of Denver after dark. How can the public support producers whose marginal operations do have to bear the burden of living with this wild public resource so that they can, with their own hands and own minds, have the capacity to invest in and respond to the surprises and challenges that these wildlife create for their businesses?

To preserve that comfortable space between the wild and the metropolitan, ranchers need time and money, our business, and most importantly – our trust.

Abby Nelson is a wildlife biologist, mother, wife, and ranch hand. She lives with her husband and one-year old daughter on her husband’s family ranch in south central Montana. 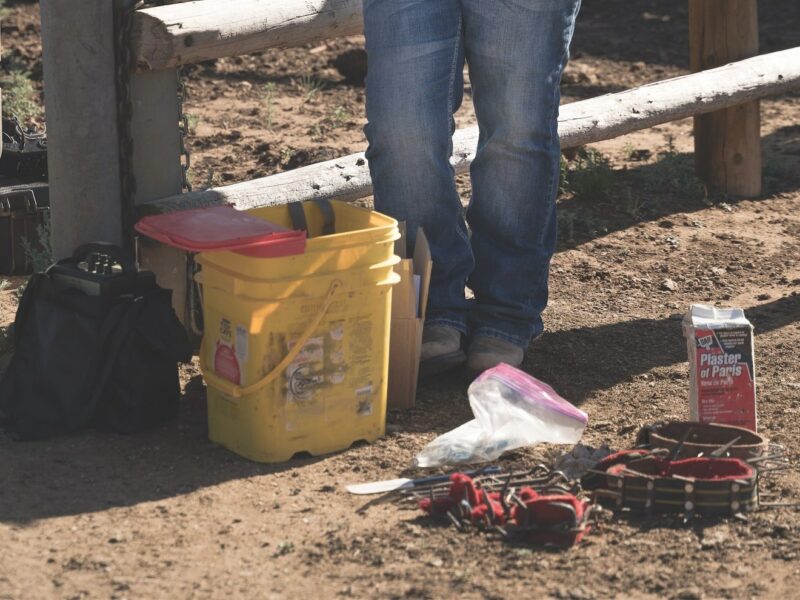